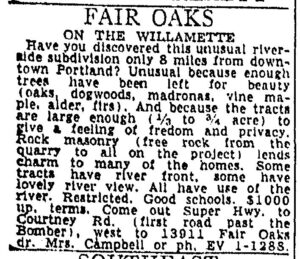 There is an old adage that says, “You can’t really know where you are going until you know where you have been”.  This applies to some degree to a recent event that occurred in the Fair Oaks neighborhood in Oak Grove.

In 1946 a woman named Alice T. Campbell platted Fair Oaks Addition, a subdivision along the Willamette River between the river and today’s Fair Oaks Ave., and from Courtney Ave. south to nearly Rimrock Ln. Alice and her husband, John W. Campbell, had moved to Portland from Hermiston in 1924 and subsequently began developing real estate along the Willamette River in Oak Grove.  They developed one large parcel on Vineyard Way in 1939.  John W. Campbell subsequently died in 1943.

Alice advertised her Fair Oaks Addition regularly in the Oregonian for a decade. Her plat showed 27 lots, including one narrow parcel, Lot 2, with a ten foot path from the road to the river, that she had set aside for access to the river for each lot owner.  It was clear from her advertisements that she even intended to build a moorage out from that riverfront access. Interestingly the 1939 Vineyard Way parcel that Alice’s husband, John W. Campbell, had developed a mile further south had a similar access point to the river. 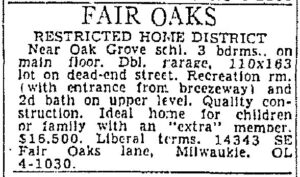 In 2015 OLHD researched the history of Fair Oaks Addition, and Alice T. Campbell.

Our investigation had revealed a lot about Alice Campbell’s life, and a decade’s worth of advertisements showed that she was creating a unique neighborhood with beautiful homes, a park-like setting with numerous trees, many lots with a view of the Willamette River, free rock for landscaping from the quarry on the site, and access to the river. Alice touted large lots, native trees, “Riverfront Privileges”, a “Restricted neighborhood”, and a river landing and moorage.

The lots were laid out in a plat map in 1946 identified as “Fair Oaks Addition”, and a subsequent unrecorded plat, identified as “Fair Oaks No.2”, was platted immediately adjacent to the south in 1952.  The 1946 plat showed one narrow parcel, Lot 2, that Alice had set aside for access to the river for each lot owner, and many of her deeds of conveyance reflected that access.

The river access continued uncontested until April 2016, when a property owner adjacent to the parcel having access to the river sued all the residents in the Fair Oaks Addition, and seven financial institutions, in an effort to extinguish the river access by adverse possession.   As they had been using the access since the 1940’s the defendants rallied, enlisted a lawyer, and fought the lawsuit. It just so happened that the lawyer representing the 27 Fair Oaks Addition property owners, who lived in Fair Oaks and was also named as a defendant, had become aware of the 2015 Oak Lodge History Detectives (OLHD) Facebook post that described the history of Alice T. Campbell and her Fair Oaks Addition. As a result of OLHD’s research the defense asked OLHD to testify at the trial, to help establish Alice T. Campbell’s intent for the easement using the documentation that had been developed in the research for the article.

The trial took place in Clackamas County Circuit Court in November 2018 before a circuit judge. The plaintiffs claimed that there was no legal basis for people using the access, and the defendants cited, among other arguments, a long- standing use of the access, clauses in their deeds, and Alice Campbell’s intent established by OLHD’s historical research.  Advertisements for Fair Oaks Addition in the Oregonian and local directory, and the directory listing indicating that Alice lived in her subdivision, demonstrated that she was creating an “unusual riverside subdivision”. These documents were entered into evidence. This historical background played a key role for the defense. The outcome of the trial was that the judge found in favor of the defense and ruled that the easement for river access remains in full force and effect.  However, the plaintiffs appealed the decision to the Oregon Court of Appeals.  After months of delays the appeal was finally decided on September 1, 2021, and in that decision the trial court’s judgement was affirmed.

Alice T. Campbell lived in her Fair Oaks Addition into her elderly years, after which she moved into Willamette View Manor where she had been a founding member.  She died Feb. 28, 1977.  Had she lived until now Alice would have been gratified to know that the river access she created for the residents of Fair Oaks Addition in 1946 would survive this legal challenge and remain available to the residents there.