Recently the Oregon Historical Society and Oregon State University combined efforts and produced a several hundred image collection of images from the Finley family. They call it “Reuniting Finley and Bohlman“. For historians interested in Jennings Lodge this is a treasure trove of Jennings Lodge history ca. 1908-1910.

Included among these photos are images of William (Bill) Jennings fishing, Thomas Spooner (“Mr. Spooner”, husband of Ella S. Jennings) and Irene Finley, two images of the Jennings family home on the bank of the Willamette River, Wm. Finley’s FIRST house perched on a narrow flat area above the river (and just below the current Finley house) in the adjacent property to the Jennings house, a Willamette River steamboat, several images of the Willamette River shoreline in the vicinity of Hull Ave., one image (at least) of the west end of Jennings Ave., Finley and Bill Jennings harvesting hay, views of the Finley property looking east from the house, “Spring Branch” (the spring fed creek that provided their water) William Finley himself — as well as hundreds of wildlife, flora and fauna images. 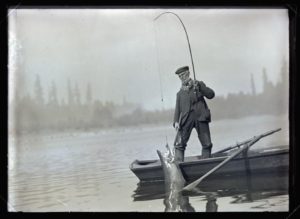 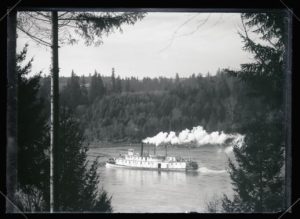 View of a boat on the Willamette River in front of the Finley house, taken from study window (Dec. 1907)

These images were scanned at such a high resolution that you can zoom in a great deal and observe the detail — leaving one to feel that he is actually there in 1909. They give us a spectacular snapshot into life along the Willamette in 1909. As far as I’ve seen these images are in the “public domain”, and can be downloaded. 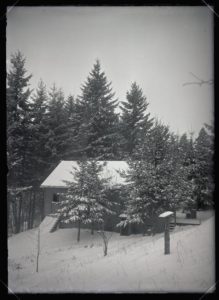 Don’t miss out — set aside some time and browse through this spectacular collection of history. Do a search on “Jennings”, or “house”, or “Spooner”, or “Willamette” and take a walk back to the early 1900’s.