New page for the Starkweather family 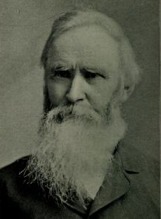 Though we are not able to meet in person, are “Social Distancing” and staying safe at home, we can still enjoy our local history.

The name Starkweather is probably not familiar to most people living in Oak Lodge today. But 100 years ago it would have been a household name. Most people today would associate it with the Starkweather house, now the Sandes of Time B&B on River Rd. – – – if at all. No streets bear the name, and there are no commemorative markers to honor them.

William Starkweather first bought land in our area in 1865, but was well known to Oregonians before then. The Starkweathers were legislators and educators and the family was intertwined with the Risleys.

OLHD has now posted information about the Starkweather family on our website (see link below), which includes Victoria’s Journal, written by William & Eliza Starkweather’s young daughter in 1879-1880 and reproduced for us by Nancy (Starkweather) Hersey. Sadly Victoria’s life was cut short in 1890 when she died from “Typhoid Malaria”. Victoria’s Journal gives us a snapshot of what life was like in Oak Lodge ca. 1880, and who was living here then. It is a fascinating read. We’ve included an introduction at the beginning for context, as well as a family group sheet at the end. You’ll find the PDF link to “Victoria’s Journal” at the very bottom of the website page. 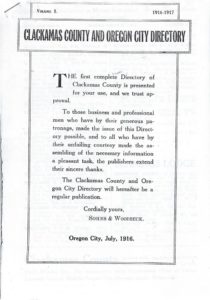 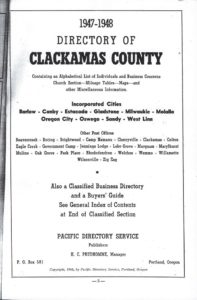 Historians and genealogists alike are well aware of the value of city directories when researching an area’s history or their family history. They can be a great research tool. Portland has directories back to the early1860’s, available at libraries and on Ancestry.com.

Oak Grove and Jennings Lodge, being relatively new communities (1890 and 1903 respectively), rarely had a directory. But Clackamas County did publish a couple of them that we know of fairly early. Not only is it helpful to see WHO was living there then, and where, one can see what some of the businesses were from the listings and advertisements. Like so many documents these directories give us a glimpse into life in Oak Lodge “back in the day”.

Check out the OLHD website for PDF’s of these two directories, and see if any of your ancestors or other familiar names show up! If you have a slow connection (like me) please be patient as it loads. Enjoy.

So, here we are, in the midst of a National (World Wide) Health Crisis and a ton of uncertainty. Do I really need to SAY it?

Due to the Covid-19 Pandemic crisis, the fact that the majority of the OLHD members fall into the “most vulnerable” category, and the likelihood that the crisis will not end any time soon, the April 9th OLHD meeting has been cancelled.

Hopefully we are all practicing “social distancing” and staying at home in our national effort to minimize the serious illnesses and deaths brought on by this new virus. So, stay home as much as possible, keep your distance from others, practice that hand washing, and STAY SAFE.  Learning about our local history can wait.

The Oak Lodge History Detectives have recently learned that Al Schmidhamer, nearly a life-long resident of Oak Grove, passed away last November 30th. Al knew a lot about the history of modern day Oak Lodge, and was part of it.

Alwin Joseph Schmidhamer was born in Portland Feb. 13, 1927. His parents were Joseph “Joe” Schmidhamer and Maria Magdalena “Lena” Herrmann, both from Munich, Germany. Under sponsorship of an uncle, Lena immigrated to Portland in 1926, followed by Joe in 1927. A cabinet maker in Germany, Joe became a sausage maker and butcher in Portland.

In 1932 the Schmidhamers moved to Milwaukie where Al attended Concord School with Bob Naef and later attended Milwaukie High School. In 1936 they built a home on Oatfield Rd. Joe found work at the Conway Packing Co. on Grand Ave. In 1939 they traded their Oatfield Rd. property for property on the west side of McLoughlin Blvd. south of Concord Rd.. It was there that they started the “Twin Oaks Trailer Camp” – later the “Twin Oaks Trailer Park”. Prior to the advent of bathrooms inside travel trailers the park provided restrooms and showers for tenants. In the late 1950’s the Schmidhamers established the Flamingo Trailer Park on Courtney – now the “Flamingo Mobile Manor”. All the while the Schmidhamers continued buying and selling trailers, and Al became involved in the business. He attended OSU for a short time but his poor grades forced him to return to his parent’s trailer business. In 1947 he traveled to Los Angeles and purchased 60 trailers for the family which sold rapidly in the thriving business. In 1952 Al struck out on his own, selling used trailers on a lot he purchased on Portland’s N.E. Union Ave. In 1 ½ years his business had expanded to a city block and he was soon operating Al’s Trailer Mart at two locations. In 1955 he was elected chairman of the Oregon Trailer Coach Association, representing trailer courts and sales lots in seven western states.

Al was said to have owned “all of McLoughlin Blvd.” at one time – – an exaggeration to be sure, but not all that far off. Al did buy and sell a number of properties on McLoughlin over the years, including a strip of property in front of the Super 99 Drive In, the original site of Dillinger’s (formerly Gaffer’s Pub), the V Bar V Western Store, a lot just north of G. G.’s, the Les Schwab property, the Wendy’s lot, the Eastside Athletic lot, and the Bentley’s Manufacturing site .

Al was a member of the Milwaukie Elks Lodge #142. A celebration of life was held for him there last December. He was the epitome of perpetual motion right up to the end. Al is survived by several children and grandchildren, and two sisters.

Sometimes doing an adequate job of documenting history requires a great deal of time and effort.  Such is the case with the program “Risleys On The Willamette” presented by yours truly last October.  But it is finally available for you to see.

The link below will take you to the Risley portion of the “People and Family Names” section of the OLHD website.  Click on the “Risley Links” at the bottom of the page to view the program. This PDF is a HUGE file so unless you have a fast internet speed it may take some time to open – if at all.  The file is 70 mb’s.  If you are totally unable to view it let me know and we’ll figure out some other means of letting you view it.  I’m still using DSL which only allows me a 5 mbps download speed (pathetic these days).  But if you’re using Comcast cable you should have no problem.

It’s a new year, and OLHD will be meeting again – for the 99th time (including events) – to learn more about our area’s history.

In addition to just a few updates we will be expanding on our knowledge of the Risley family history. Further research into information presented at our last two gatherings has revealed another family member, unknown until now, with a fascinating story.

Join us on Feb. 13th for the presentation “The Mysterious Mary E. Risley – An Exercise in Genealogical Research“.

Minutes from our last meeting are posted on the OLHD website. As always renewals, new supporters, and donations will be accepted.

We look forward to seeing you on Feb. 13th!

As we race into the holiday season we shall meet one more time before year’s end to satisfy our thirst for history.

In addition to just a few updates on history related things going on in the community we’ll be complementing the Risley program we did in October with “Unraveling the origins of the Risley & Creighton Donation Land Claims” (or TRYING to) —— AND “La Roche – What’s in the name?” (a working theory).

As always membership renewals will be accepted, as will new memberships.  The minutes from our last meeting will be posted on the OLHD website.

We look forward to seeing you on Dec. 12th!

Last Thursday’s OLHD meeting was a great success. Thirty five people attended our annual meeting, with members renewing their membership and others joining for the first time. We were very pleased, and honored, to have nearly a dozen descendants of Jacob S. Risley present and it is our sincere hope that we will continue seeing them in the future, and continue the Risley/Bradshaw conversation. 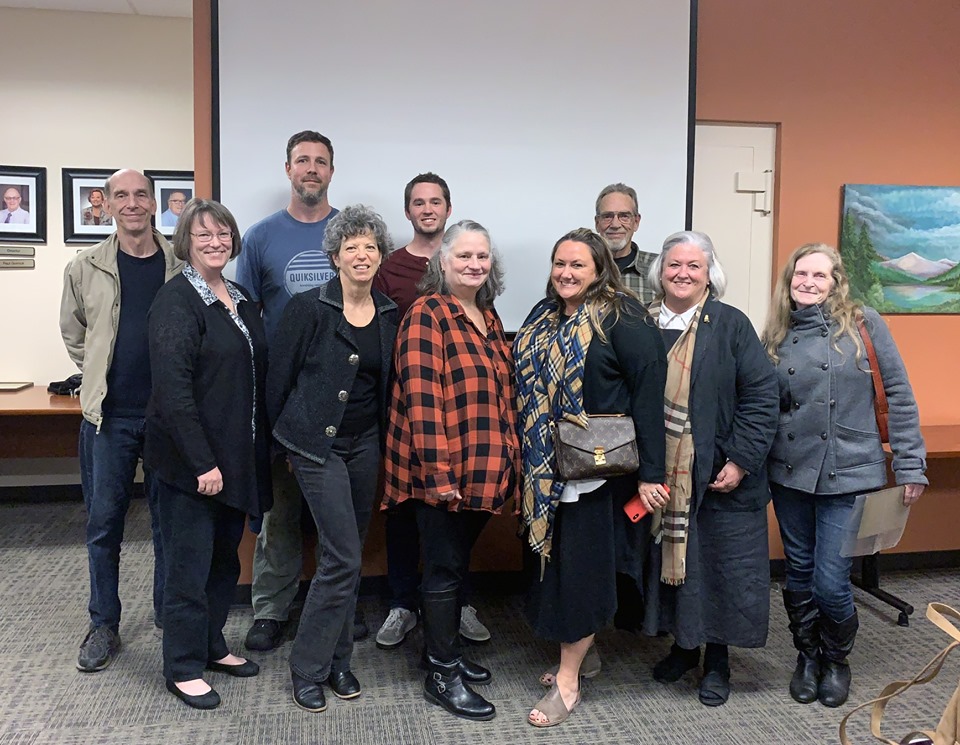 The “Risleys On The Willamette” program was well received by the attendees. What could easily fill an entire book was squeezed into one hour, covering the period from about 1808 to 1930+. The Risley, Starkweathers, and Bradshaw families were icons in the Oak Lodge community, their legacy extending well beyond Clackamas County. The amount of historical information available about them is staggering, and comes from a multitude of sources.

Just one example of the amount of information available comes from the Oregon State Archives’ Historical Records Index. The Archives house all kind of documents about Oregonians. A search of “Risley” produced three pages of hits, including one for the Multnomah Co. Estate record for Orville Risley.

Copies of these documents can be obtained from the Oregon State Archives. “Delayed Births”, for example, were submitted by individuals born before Oregon required birth certificates – – primarily so that they had documentation to apply for Social Security. Delayed Birth records sometimes contain affidavits from family members, sometimes a drivers license, bible record, or other type of source of birth information.

Thank you Risley family for a very enjoyable evening!

It’s time for our OLHD annual meeting! This year’s annual meeting is being delayed two weeks from the usual 2nd Thursday due to a trip planned by yours truly a year ago.

Our annual meetings are your opportunity to renew your support for OLHD by renewing your membership, and new members are always welcome. Our Treasurer and Membership Chair will be on hand to accept your cash or checks, so bring your checkbooks.

This is also the time of year when OLHD fills the Board vacancies for the coming year. This year all of the positions will be open for re-election or nomination (President, Vice President, Secretary, Treasurer, Director at Large).

The June 2019 Minutes are available on the OLHD website.

We hope to keep the business portion of this meeting short, and in contrast we’ll be presenting:

THE RISLEYS ON THE WILLAMETTE 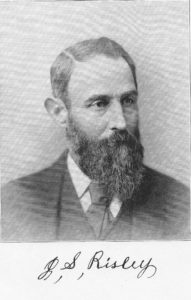 We look forward to seeing you on Oct. 24th.

The Jennings Lodge CPO invites you to a Special Heritage Celebration on Tuesday, September 24, at 7 p.m. In lieu of its regular business meeting, The CPO is hosting a celebration of Jennings Lodge history, which will include recognition of the first outdoor interpretative heritage sign recently installed in Jennings Lodge. This event will also celebrate the work of many in the community to get and put together the content of that sign.

The celebration for all ages begins at 7 p.m. at the intersection of SE Jennings Avenue and Morse Street (just west of River Road.) Refreshments, activities and information tables where you learn and can ask questions, will follow at a reception/community gathering at the Nazarene Church (across the street) at 4180 SE Jennings Avenue. Come talk with other community members, celebrate Jennings Lodge history, learn and test yourself on what you know about Jennings Lodge. Invite your family, friends and neighbors – everyone interested in Jennings Lodge!

If you would like to help at the event or more information about the Jennings Lodge Community, please contact jenningslodgecpo@gmail.com